Clippers Big Bounce Back and How the Players Are Trending 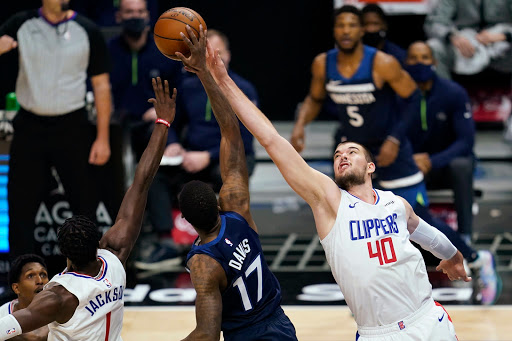 After suffering their worst loss in franchise history to the Mavericks, the Clippers bounced back and blew out the Timberwolves 124-101. The Clippers, who lacked Kawhi Leonard and Marcus Morris Sr. in each game, took a horrendous loss on Sunday but came out energized to play against Minnesota as they displayed a great example of team basketball with 7 players scoring in double digits in part from 32 assists.

Following the dreadful performance from the Clippers against Dallas, Clippers Center Ivica Zubac noted that the team simply just let the Mavericks "do their plays like a walkthrough." Well, this game against Minnesota was clearly anything but a walkthrough as the Zubac and the Clippers highlighted the physicality and aggressiveness that they possess. After starting off on another rough note tonight, Lou Williams, Ivica Zubac, and the rest of the second unit made their presence immediately felt as Zubac delivered 6 points and 3 blocks in his first 11 minutes in and Williams had 9 quick first quarter points. One thing that the Clippers had trouble with last year was their second unit and how they performed when Kawhi Leonard and/or Paul George checked out of the game. Tonight, those guys brought energy and gave the Clippers a 4 point lead at the end of the first quarter and the team didn't look back as that lead was propelled to 20 by the half after at one point going on a 29-7 run.

With Leonard sitting yet again, Luke Kennard started in his place and scored 15 points. When the Clippers become confident, they are a very tough team to beat. Their confidence translates to their role players in Lou Williams to take more shots, Luke Kennard and Patrick Beverley to shoot more threes, Terance Mann to shoot confidently and become decisive while playing smarter, Ivica Zubac to become more aggressive in the paint, and Nic Batum in possessing that high basketball IQ.

While Paul George maybe didn't increase his scoring by that much tonight after scoring 15 against Dallas, he didn't need to as the rest of the team stepped up. After the seemingly inexcusable blowout loss to Dallas, Paul George took "full responsibility" as a result of the game and noted after last night's game that "no team is in their perfect form or close to it right now." That is a strong point as it is early in the season and many teams are still figuring themselves out. The Clippers haven't even had Marcus Morris Sr. play a game yet and Kawhi Leonard still has to return from his injury.

Although we've had a small sample size so far to judge how this season could go for the team, we do have some indication on how it could go for certain players. Terance Mann is a player that is trending upwards as he's shown great production off the bench in a playmaker that the Clippers need and his passing can provide that. If Mann can continue to play smart on the court and showcase his solid defensive play, then Tyronn Lue would likely use him a lot in backing up Patrick Beverley. Another player that is trending upwards is Nic Batum. In filling in for Marcus Morris Sr., Batum has shown us some great performances that have also come as surprising to many as it was thought that the Clippers would just go big and run Ibaka and Zubac in the starting lineup with Morris out. While Batum's starting job may not be secure, he can provide some very meaningful minutes off the bench, when Morris returns, in a SF or PF spot that the Clippers have needed someone to step up in. He can do that with his high basketball IQ, ability to teach younger players, and his understanding of knowing his role. Ivica Zubac also looks to be trending positively as had a very aggressive performance last night where he tallied 3 blocks and 12 points and has embraced his new role off of the bench. Lastly, another upward-trending player is Reggie Jackson. In what was arguably his best game in a Clipper uniform, Jackson displayed defensive intensity that we haven't seen from him before. Although he may not play solid on-ball defense (or off-ball for that matter), he does display quickness that can be used to jump into passing lanes and collect steals as he gathered 4 steals last night. While Clippers Coach Tyronn Lue has shown he would bench Jackson among bad performances, Jackson can earn his minutes by bringing that defensive presence and play smarter offensively.

When having such a big loss like the Clippers did on Sunday where just about the whole team played poorly and a big win last night where about the whole team played great, it could be hard to point out certain negatives but there are some that are notable. While Luke Kennard did have a great performance yesterday, he could be on the downward trend as he plays well with his shooting mostly and he'll really have to make the most of his shots going forwards when Leonard and Morris return. His defense isn't too great and the main defensive difference between him and Reggie Jackson is that Jackson is quick and able to step in the passing lanes and recover at times when beaten while Kennard lacks speed. Another downwards headed player is Mfiondu Kabengele. While he doesn't get much playing time to start, he needs to make the most of his minutes as he usually only gets in when the bigs are in foul trouble or in blowout games. Kabengele is a player who the Clippers seemed to be very high on as they traded up in the 2019 draft to select him and have excluded him in multiple trades they've made but it was surprising when it was announced before the game yesterday that the Clippers didn't pick up their third-year option with him. That means that they'll see how he performs this season and then decide if they want to bring him back or not. Last night in the 8 minutes he played, there was a noticeable sense of urgency and panic that he played with and he simply just has to play relaxed like he had in previous games. Lastly, Patrick Patterson is also on the downwards spiral. After playing poorly in the Clippers first game and mediocre in the next few, Patterson was a DNP-CD last night. With other players like Zubac and Batum stepping up and Morris yet to make his return, it's hard to see Patterson getting a set role in the first few units.

While it is early in the season, the Clippers are on their revenge tour from their heartbreaking playoff outcome last season. With role players stepping up and the team playing with energy, aggressiveness, and confidence, this team is very difficult to overcome.

The Clippers next play the Portland Trail Blazers tonight at 7 PM PT.

Posted by Griffin Greenberg at 2:04 PM