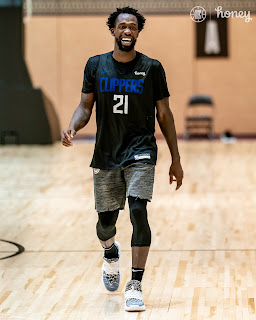 LA Clippers PG Patrick Beverley has left the NBA Orlando bubble due to an "emergency personal matter", according to ESPN's Malika Andrews.

Beverley traveled with the Clippers since they left for Orlando on July 8th. He is now the second Clipper to leave the bubble and the 4th to not be in the bubble as of now.

Montrezl Harrell also left the bubble due to a family emergency involving his grandmother. Landry Shamet has yet to enter the bubble after his positive test for coronavirus and Ivica Zubac has yet to enter as well but they've both indicated on their Instagram stories they will be there soon. Marcus Morris recently joined and got in a day of practice with the team before their scrimmage against the Magic later today.

It's uncertain when these players will return to the bubble as the Clippers organization has kept quiet on their players entering the bubble as noted from Marcus Morris surprisingly practicing yesterday after there were no reports that he entered. In other words, he entered a couple days before practice, quarantined for those 2 days, and then was cleared to practice. These players have to spend 4-10 days in quarantine when re-entering the bubble if they were tested regularly while out of the bubble. If they were not tested regularly, they will have to quarantine for 14 days.

It looks like the Clippers won't have Harrell and Beverley for all 3 scrimmage games and maybe even the first regular season game of the season restart on July 30th against the Lakers. As for Zubac and Shamet, we're still unsure on their status as they may have entered the bubble already but the Clippers could be keeping quiet on it like they did with Morris. The Clippers will play today's first scrimmage game short-handed likely starting Reggie Jackson in at Point Guard for Beverley and Joakim Noah at Center as he is currently the team's only Center.

Lastly, Head Coach Doc Rivers has hinted they may not want to play key players like Kawhi Leonard or Paul George much during scrimmage games which is understandable. Doc Rivers and the Clippers want to be completely healthy with their full squad for the 8 regular season games and more importantly, the playoffs.

We hope all is well for Patrick Beverley and his family and Montrezl Harrell and his family.
Posted by Griffin Greenberg at 7:49 AM