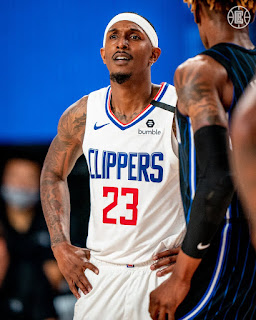 
It's said that all of these players are coming to Orlando but Clipper fans encountered a scare yesterday as the NBA G-League Twitter posted that Jonathan Motley would be joining the Clippers in Orlando. This led many to think that Zubac or Harrell would not be going as Motley is another big man that would take their sport but Andrew Grief says that this is not accurate and the Clippers will be staying with their original 15-man roster.

This is not accurate, per source. To bring a player into the bubble now would require a team to replace another on their roster. Clippers will be staying with their 15-man roster. https://t.co/1BeL3wR32Y
— Andrew Greif (@AndrewGreif) July 24, 2020


The Clippers are now very short-handed with Williams leaving. It is still uncertain when these 5 players will come to the bubble so other role players like Reggie Jackson, Joakim Noah, and Rodney McGruder will have to step up during their absence. There also is a decent chance that the Clippers will not have the players out of the bubble for the first regular season game against the Lakers on July 30th as they have to spend 4-10 days in quarantine when re-entering the bubble if they were tested regularly while out of the bubble and if they were not tested regularly, they have to quarantine for 14 days. During the Clippers' 9 point win in their first scrimmage game against the Magic, Williams had 22 points on 53.8% shooting in just 16 minutes. He arguably played the best on the Clippers and looked very comfortable being back out there as it concluded that the NBA season suspension for coronavirus helped him.


The Clippers will give more playing time to guards like Terance Mann (who surprisingly only played 7 minutes against the Magic), Rodney McGruder, Amir Coffey, and Reggie Jackson (who has already been filling in for Beverley) due to Williams' absence. The Los Angeles Clippers will face the Washington Wizards tomorrow at 5 PM Pacific Time.

We hope all is well for Lou Williams and his family!

Posted by Griffin Greenberg at 10:34 AM