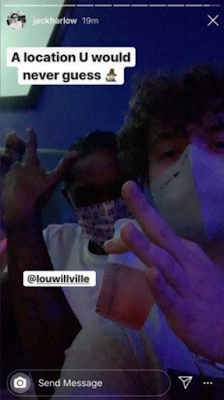 On Thursday night rapper Jack Harlow posted a picture on Instagram with Clippers guard Lou Williams at the Magic City Gentlemen's club. At first, Harlow denied this picture was recent as he said he "reminiscing" because he missed Williams. After the picture blew up on social media, Lou admitted to league officials that he was at the club but he said he only stopped by to get food as he's said over the years that Magic City is also one of his favorite restaurants. Williams claims he was a Magic City for a short time and then left to go to his grandfather's funeral a day later.

With the 10-day quarantine Williams will have to miss the Clippers' final scrimmage game against the Kings and the first 2 regular season games against the Lakers and the Pelicans. He will be able to return on August 4th against the Suns. The Clippers will have to have players like Reggie Jackson, Landry Shamet, and Rodney McGruder step up in his absence. Terance Mann and Amir Coffey may also see some more playing time with him out. 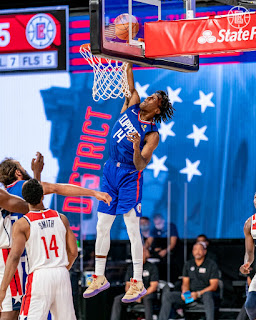 In other news, Ivica Zubac and Landry Shamet have entered the bubble, Montrezl Harrell says he's coming back soon and Patrick Beverley is expected to return soon. Yesterday the Clippers beat the Wizards 105-100 after stellar performances by the 3rd string players. With Kawhi Leonard struggling as he scored 6 points going 3-16 from the field and 0-8 from 3 in 24 minutes and Paul George struggling as he scored 11 points on 10 shots and shot 1-4 from the free throw line, the Clippers needed others to step up and they did. Marcus Morris had 13 points on 5-9 shooting, Reggie Jackson had 10 points in 20 minutes, JaMychal Green had 9 points and 10 rebounds, Patrick Patterson had 16 points on 70% shooting along with 6 rebounds, Terance Mann had 13 points, 7 rebounds, and 4 assists, Amir Coffey had 13 points, and Rodney McGruder also had 13 points and 5 rebounds to go along with some clutch shots. Joakim Noah also had a great defensive game as he only scored 1 point but contributed with his 6 rebounds, 5 assists, and 5 blocks. In other words, the whole team stepped up when PG and Kawhi didn't play well and that's a great sign for the Clippers to see that they may have even more bench depth than we thought.

The Clippers face the Kings tomorrow at 1PM PT.
Posted by Griffin Greenberg at 12:20 PM