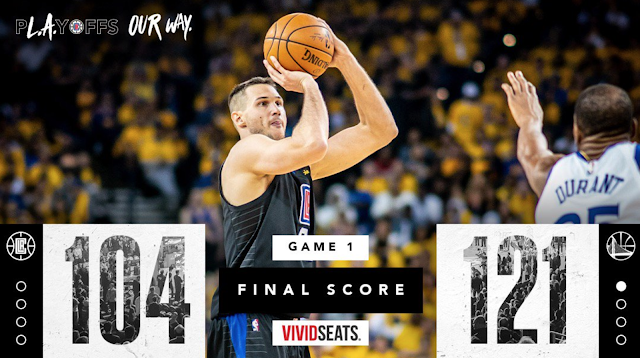 In the 1st game of round 1 in the Clippers vs Warriors matchup, the Warriors ended up winning 121-104. The story of this game besides Stephen Curry's takeover, was the Patrick Beverley vs Kevin Durant matchup. Coming into the series, most believed the Clippers would be swept by the Warriors 4-0 as it's the Warriors. It just sucks for the Clips that they have to face Golden State as it could define their season as very defeating if they do get swept. It sucks even more that their horrible loss against the Lakers put them in such a bad spot in which they could have been playing a much preferred Denver team as the Nuggets are very inexperienced.

In the game the Clips hung around in the 1st quarter as they took a 1 point lead with about 5 minutes to go before the Warriors overpowered and went up 9 to finish the quarter. It looked to be as the Warriors had a gameplan of going under even screen that the Clippers set forcing them to shoot. That is a very risky move against this Clippers team that can shoot the lights out at time but it worked. In the second quarter the Clippers came out ready as Lou Williams and Montrezl Harrell sparked the offense and the Clips came back and were down by 2 with a bunch of lead changes occurring with about 3 minutes left. At that time, things were looking good as Lou was driving and scoring at ease and Harrell was finishing easily as Lou finished the 2nd with 15 and Harrell with 22. All of the sudden, madness occurred as calls looked to be pretty one-sided (in favor of Golden State) and the Clippers kept getting frustrated which led to Golden State scoring. In those last 3 minutes of the 1st half is where the Clips lost the game as they totally lost their composure and had a reason to. Now I may be biased but many non clipper fans on twitter were questioning the calls made in favor of Golden State and how the Clippers were getting nearly any when players like Shai Gilgeous-Alexander drove and got slapped on the wrist. Players like Danilo Gallinari were getting pissed and Gallo even picked up a technical which is rare to see. This is really where the game split wide open and away from the Clippers and the Warriors took a 13 point lead a halftime. In the 3rd the Clippers showed glimpses of comebacks as they cut it down to as low as 6 before Stephen Curry erupting from the 3 point line. Finally in the 4th, the Clippers couldn't keep up and more KD x Beverley drama erupted as they got 2 pairs of double techs in a span of 20 seconds which caused both of them to be ejected. Curry finished with 38 points, 15 rebounds, 7 assists, and 4 turnovers in 36 minutes and Durant finished with 23 points, 4 rebounds, and 3 assists in 32 minutes. On the Clippers side, Gallo played poor as he had 15 points on 14 shots, Shai had 18 points on 16 shots, and Lou and Trez became the only bench players to score 25+ each in a playoff game. Some things to note were that Shamet didn't score until early in the 3rd quarter and if they got him involved earlier I feel like this could have been a different game with the Warriors going under every screen. Also, it doesn't show it in the stat sheet, but Garrett Temple did play great as he stopped Curry and Klay in the Clippers' run with great perimeter defense. It still stings going back to that Rockets vs Thunder game where if the Rockets closed it out and won, the Clippers would be playing Denver who is currently struggling with 4 minutes left in the 2nd quarter as they are down by a dozen (at the time I'm writing this). In this game the Clippers starters were nowhere to be found. Game 2 is Monday night at 7:30 pm PT. 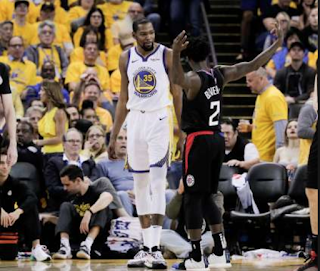